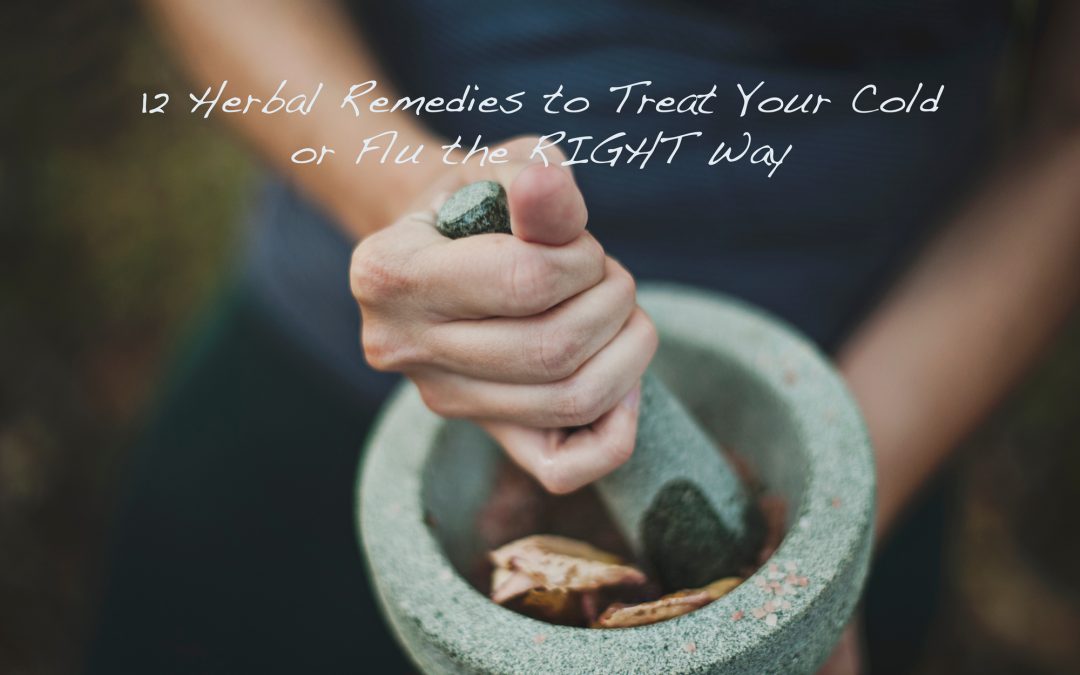 The internet is saturated with DIY home remedies for colds and flu. Some of the information is helpful, and some is just so varied and contradictory that it is difficult to understand. It can be confusing to wade through the myriad of herbs and formulas, trying to choose (in many cases guess) what might work the best for you and your loved ones.

In TCM, colds and flus are generally classified as “invading wind”, or an external pathogen that has invaded and surpassed the exterior immunological defences (like wei qi) of the host. This invading wind can further be divided into “wind-heat” and “wind-cold”. If you guessed that each has distinguishing signs and symptoms, you are right. Depending on which pattern of invading wind is present, particular herbs or formulas with opposite properties help to dispel the offending energies and bring the body back into balance or homeostasis. Consideration must also be given to the special qualities of certain herbs that are not necessarily related to their energetic properties but are essential to their healing actions. An example of this would be Elderberries, which have potent anti-viral compounds.

Depending on which pattern of invading wind is present, particular herbs or formulas with opposite properties help to dispel the offending energies and bring the body back into balance or homeostasis. Consideration must also be given to the special qualities of certain herbs that are not necessarily related to their energetic properties but are essential to their healing actions. An example of this would be elderberries, which have potent anti-viral compounds.

Below are some examples of herbs and formulas from TCM, Ayurveda, and Western herbalism used for each external wind pattern.

Many of the herbs used for treating typical flus fall under the TCM categories of “clear heat and resolve toxins” and “cooling diaphoretics”.

This classic Chinese formula clears heat and wind, and is diaphoretic (induces sweat). Lonicera japonica (honeysuckle) is cool, sweet, and regarded as an antibiotic herb, not unlike the Western herb Echinacea (which has unpredictable results in flu treatment). Forsythia suspensia is cold and bitter, antibacterial, drains dampness and fluid (diuretic), and alleviates phlegm and mucus. The honeysuckle flowers and forsythia seeds are used. Both of these herbs can be and are grown as Western garden ornamentals. There are a number of assistive herbs added to this patent formula.

A quintessential herb for viral infections and inflammations in TCM. It is very cold and bitter. The roots and leaves are used. I grew woad without difficulty in my herbal garden last year (zone 9a). Be careful with cultivation, as this plant spreads easily and is quite weedy. The patent formulas containing woad are easily found in North America.

Found hanging from the branches of trees, this fungus/algae symbiosis resembles a stringy beard. It is cold and sweet and has a special affinity for the lungs. In addition to being antiviral, it is also effective against gram-positive bacteria, making it useful in conditions like strep throat and other upper respiratory infections. Usnea can be collected most easily after a wind storm has downed tree branches. Usnea is not very water soluble and it is best taken as a tincture for flu treatment.

Yarrow is a cooling diaphoretic, an immune stimulant and expectorant. It is bitter and spicy. The leaves and flowers of the plant are used. Yarrow has so many uses that I call it a first aid kit in a plant. For flus, it induces sweating to “release the exterior” (pathogens). Yarrow grows abundantly in the wild in North America and tolerates a variety of environmental conditions. It can easily be cultivated as a herb and garden ornamental. It is commonly associated with the mystic arts in both Western and Eastern cultures. The Chinese use it for I Ching divination.

Black Elder is native to Europe and cultivated in North America and other countries. Both the berries and flowers are used in treatment of colds and Influenza. The elderflower is cool, bitter and acrid. Elderflowers can be combined with other cooling diaphoretics like peppermint and yarrow for an effective treatment for wind-heat. Elderflowers can cause nausea and vomiting in high doses.

Elderberries are cool and sweet, induce sweating, are diuretic, and have special antiviral qualities. They are both immunostimulating and immunoprotective. Although elderberries are cooling and suitable for wind-heat patterns, I have seen them used successfully in wind-cold conditions. Both the berries and flowers alleviate coughing and phlegm.

Black Elder is the most commonly used medicinal species of the elders. Other varieties like Red Elder are known to be more toxic, or at least irritating to the GI tract. Harvesting the flowers of Red Elder is common practice in my area of the Pacific Northwest where they grow in the wild abundantly and are used safely in herbal medicines, but the berries are generally avoided.

A favorite way to prepare elderberries is Elderberry Syrup, as seen in this video.

Unripe and uncooked elderberries of any species can be toxic and potentially poisonous, sometimes causing GI irritability. Generally, the bark is too potent for casual use.

Use equal parts of yarrow, elderflowers, and peppermint. Optionally, add 1/4 part licorice root, and a few slices of fresh ginger. Steep in boiling water for 20 mins at a ratio of 1:10 plant to water (grams to ml) for fresh herbs, and 1:20 for dried herbs. Strain and drink sweetened with honey if desired.

Boneset is a favorite traditional Western herb with great detoxifying and antipyretic (fever reducing) properties. It is cold, bitter and acrid. Boneset is especially good at treating wind-heat with a barking cough, and/or deep aching pains.

Boneset was so appropriately named for its effectiveness in treating Dengue fever (also called “break-bone fever”), which presents with high temperatures and excruciating bone and body aches.

Boneset is typically drunk as tea, often with other herbs that are heat clearing or diaphoretic, although Stephen Buhner says “the herb is bitter and about as much fun to drink as a tea made from earwax”. Too large a dose of boneset will cause nausea. Trikatu is a classic, widely used cold dispelling Ayurvedic formula. Trikatu will raise or increase pitta (hot fire element) to balance excess kapha (cold water and earth elements). It can be taken alone as a relatively simple mixture, or as part of more complex formulas. Trikatu translates as “3 pungents”. It is especially useful if there is indigestion or poor circulation present.

Trikatu can be purchased as a pre-made formula from Ayurvedic herb suppliers, or easily prepared from bulk herbs.

Combine equal parts of powdered black pepper (Piper nigrum), long pepper (Piper longum) and dried ginger (Zingiber officinale). The combination may be taken as capsules, or mixed with honey to form a paste to take a few tsp daily.

Cinnamon Combination is a patent Chinese formula used for wind-cold conditions in weaker constitutions with Qi deficiency, as it is Qi preserving.

Cinnamon is sweet, warm and pungent. It is combined with other herbs in this formula that are warming and tonifying.

A warm and pungent Indian herb that is diaphoretic, expectorant, antipyretic, nervine, adaptogen, antimicrobial, and immunostimulant. Holy basil eliminates phlegm and dampness and is good for lung and nasal congestion. We can see it is a multi-functional herb covering many symptoms that might be present in wind-cold. Although mild, it is considered a virtual panacea in Ayurveda, and dispelling wind-cold is only one of many uses.

It is commonly drunk as a tea. Combine holy basil and trikatu in an infusion to enhance pungency and cold dispelling properties.

Holy basil grows prolifically in my garden as an annual (zone 9a).

Ginger root is warm and pungent. The dry root is hot. Taken at the first sign of wind-cold, it is effective as a tea/decoction on its own, sweetened with a bit of honey. Infuse or decoct the fresh root for 5-10mins, keeping the lid on the pot and being careful not to let the volatile oils escape.

Another classic Ayurvedic formula that raises pitta and subdues kapha. The traditional mixture includes rock sugar, bamboo powder, long pepper, cardamom, and cinnamon. The powder can be taken alone, or combined with ghee or honey, both commonly used medicinal carriers in Ayurveda.

Honey is kapha and phlegm reducing due to its astringency. Aged ghee (clarified butter) is suitable for all dosha types and is anti-inflammatory.

The conifers of the Pacific Northwest hold a special place in healing traditions of the area, and they are very dear to my heart. This list wouldn’t be complete without these wonderful life-giving trees.

Warming and drying in nature, the needles, pitch, and bark can be used for medicine. Fir is antimicrobial, astringent (drying), antiseptic, diaphoretic and expectorant. Fir needles have a high concentration of vitamin C (as does Pine, which can also be used in a similar way). A delicious fir needle decoction can be easily prepared and helps to induce a detoxifying sweat to eliminate pathogens and make coughs more productive. Blend the needles with other herbs like ginger for added effect and flavor. Fir tips also make one of my favorite medicinal honeys, which can be added to any tea for extra effect, or taken on a spoon.

New fir tips appear in Spring and are sweeter, but the older mid-Winter fir tips have the most vitamin C. Effective treatment of Influenza and colds ultimately depends on the energetic patterns present in the individual. Herbs, although generally milder and far less toxic than prescription medicines, do come with their own unique cautions and contraindications. Always check with a herbalist or other qualified practitioner if uncertain about the suitability of herbs to your situation.